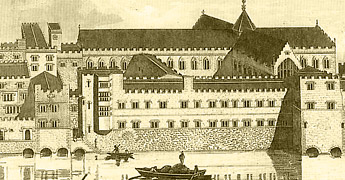 The Savoy Hospital as constructed in the early sixteenth century. The chapel (with offset tower) can be seen in the upper left-hand corner.

A palace was built on the Savoy estate in the fourteenth century by John of Gaunt (1340-1399), a younger son of King Edward III. Its lifetime was short. It was plundered and burned in 1381 during the Peasants’ Revolt. Contrary to a persistent belief, nothing of the palace survives above ground. It remained semi-derelict until what was left of it was cleared away in the early sixteenth century by command of King Henry VII to construct a foundation known as ‘Hospital of Henry late King of England of the Savoy’. The hospital was begun towards the end of the king’s reign and completed by 1515. It was a charitable foundation to provide a night’s lodging for 100 ‘pour and nedie’ men. Engravings of the hospital show an extensive complex of buildings, including a great dormitory, longer than Westminster Hall, and three chapels, dedicated to St John the Baptist, St Catherine and Our Lady. The hospital foundation was dissolved in 1702 and most of the complex was demolished in the early nineteenth century for redevelopment and to allow the construction of the approach road to the new Waterloo Bridge. All that survives today is the Chapel of St John the Baptist, now known as The King’s Chapel of the Savoy.

A Pitkin guide to the chapel, is available at the Chapel, price £5